For any 1 who loves cheese

I will start with a little piece of cheese trivia for you. Did you know that some cheeses are designed with rinds so that they can survive the environment of a mine. An example of this is Caerphilly which has a moulded, hard rind to protect it while the miners store it down the mines ready for their lunchtime. When a hard days mining is over and the miners have shifted tons of coal ready for use in industry or for keeping homes warm, they probably wouldn’t have expected that one day the charcoal would have been blended with their favourite lunch food; cheese.

It is popular on the continent for cheese producers to coat the outside of goats cheeses with ash or charcoal, but rarely has it been blended into a cheese. This is what Michael Lee (http://www.finecheesesltd.co.uk/) of Michael Lee Fine Cheeses Ltd. has decided to do and it looks intriguing from the start. When I approached their stand at the Food & Drink expo 2014 I was met with a wonderful display of cheeses with Char Coal at the forefront. 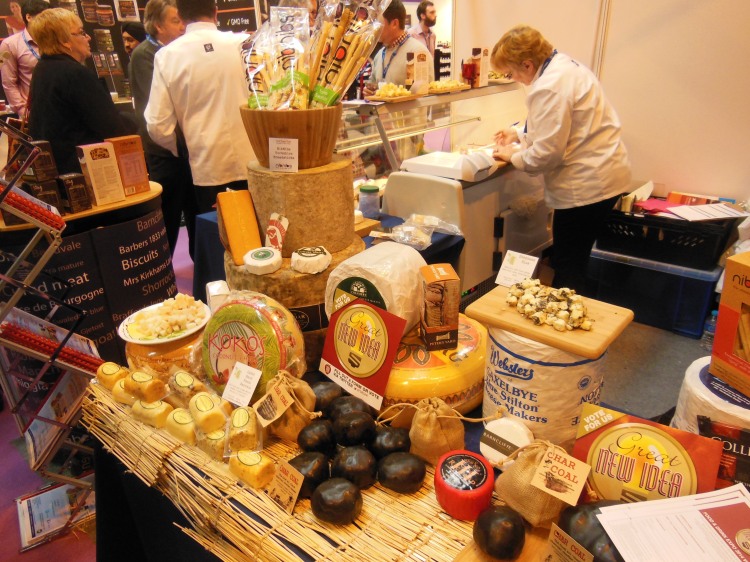 The little black waxed cheeses you can see are the Char Coal cheese and they can also come in a hessian sack which makes this cheese even more special in appearance.

I think that the appearance and packaging of this cheese is spot on and it makes your imagination jump to all sorts of tasty thoughts, but before I get to that I will explain more of its back story.

Michael Lee had wanted to create a black cheese for a while but needed some time to assemble his thoughts into a logical, sellable and appealing idea. Michael then sourced the charcoal from a local mine close to his business which is based in Featherstone, West Yorkshire. With that Char Coal was born and its the first all black & charcoal blended cheddar cheese. This is the perfect year to release because on the 12th March it was 30 years since the mining strike and this cheese helps support the local mining communities. Char Coal is now being released to the market and It leaves an impression on anybody who tries it.

This leads me to the taste of the cheese and you won’t be expecting the flavour that you get.

I was with Michael Lee at the time I tried this cheese and he personally offered me a taster and he was kind enough to let me take one away to review on jhbcheesy1.com.

The black colour of this cheese certainly plays with your mind and you don’t really think you should be eating it as it does look like a piece of charcoal its that convincing. Once you have got over that and you taste it you will fill your mouth with a creamy, smooth mature cheddar which is delicious. This would make a fun addition to a cheeseboard and would be a talking point among your guests. I could also see this being used for toppings on dishes which would also raise a few eyebrows. I love the way Char Coal because challenges your perception and how it would also challenge your diners to an unexpected twist.

Overall I think that if you love foods that make you think but also provide a brilliant flavour then look no further than Char Coal. This cheese is available to purchase direct from Michael Lee (all the information is at the top of this page on their advert)

Reply to the Cheesy1 Cancel reply

This site uses Akismet to reduce spam. Learn how your comment data is processed.

Cracking a Whole Stilton from @cropwellbishopcreamery open this morning ready for the Mistletoe Fayre in Hythe today.
A fantastic evening at @guykremerlymington hosting a cheese & wine evening alongside @knackeredmother & @thesolentcellar for their clients. Great wine, great cheeses and great people.
What a wonderful time at the @internationalcheeseawards & @_lovecheese events. It is been a brilliant experience and something I'm looking forward to in 2022 already! Thank you to everyone for their support.
@chrisbaber and the @jhbcheesy1 seeing the new @ds_uk DS4 in the flesh. A wonderful standout car that exudes presence and the savoir-faire that you would expect from the @ds_official brand. If you live near Stafford then @wrdaviesmotors is the dealer you are looking for. There is more to come from DS & Myself but for now I look forward to driving one soon!
@jamesmartinchef is currently on stage entertaining the guests of @_lovecheese live with some delicious cooking
What a cheesy filled day! It was fantastic to see everyone and talk cheese at the @internationalcheeseawards. Tomorrow is the start of the @_lovecheese event and I can't wait to see everyone there!