For any 1 who loves cheese

On Monday 10th October Emma & Myself visited Quickes Farm for a tour with none other than Mary Quicke herself. Everybody we met on the day were so hospitable & friendly and the surroundings & landscape in the area is stunning; it was perfect English countryside. We met Mary in the office and we begun with a tour of the Farm & Creamery, but first stop was the field to see the new calves.

Once we walked past the fields & calves we headed past some old apples which were drying the sun for the use in cider & apple juice. While we were walking to the first cheese store I asked how long the farm had been there and within their family. For 476 years their family has created a well established & renowned farm with the production of high quality meats & cheeses. Quickes are responsible for innovating and collaborating to ensure that Farmers & Public work together for the longevity. Mary Quicke’s Father Sir John Quicke was responsible for the movement in the  Country Landowners’ Association (CLA – Now the Country Land and Business Association) which he was  President, because of this most of England’s Farmers and landowners try to combine productive farming with care for the countryside. When in the 1920’s the Exeter milk board didn’t want milk from them so they had to destroy all their milk. They then decided that they couldn’t do this any longer so applied for a cheese making license. Many years later they found the license again which is when Prue (Mary’s Mother) built the dairy herself to support this. The significance of Quicke not only for Devon but the country is vital as it is part of our Farming & Dairy heritage. Mary showed us to the first cheese store where it housed their youngest cheeses from production to around 2-3 months maturation. The smell was sweet & full but not so mouldy, almost caramel like. We then entered the creamery itself where cheese production was in full swing and they were producing vegetarian cheese as it was Monday for Waitrose. Diverting off to the side was the butter making and there was fresh warm whey cream coming from the cheese production which we were allowed to try. It was slightly sharper but was a delicious base for their butter. We then got to see the butter being patted by hand which they are the only hand patted butter producer left in England. Making our way back through the cheese making we headed with enthusiasm to visit the ‘Cheese Cathedral’ which is their largest cheese store where they move all the cheese from the 1st store to here. They range from 2-3 months to 2 years maturation and the smell in here was more mouldy but again retained a certain sweetness in the nose.

The racks in the this photo of the ‘Cheese Cathedral’ are very clever and I’ve never seen them before. They store 4 cheeses which weigh collectively 104 kg but can be spun round to turn them over. By ensuring you turn the cheese it provides the best air & moisture coverage to mature the cheese as efficiently as possible for the tastiest cheese. This truly was like a ‘Cheese Cathedral’ because of the size & the pitched roof made it stick out from the square box for cheese that I’m use to. On the way out Mary just couldn’t help to show us their ‘Cheese Mite Extractor’ which is eco friendly and works by wheeling one of the racks of cheese in and blowing the mite off to then be vacuumed away. Impressed by the simplicity of the cheese mite solution we headed to the smoker to see the oak chippings they use for smoking their cheeses. It is a traditional smoker (no liquid smokes here!) and is connected to the packing room for ease of production and the way the flavour develops the cheese isn’t too overpowering and goes on top of a chilli for a little extra edge. In the packaging area it was a hive of activity with cutting, wrapping, boxing all within a close proximity of one another. The storage fridge had cheese destined for local shops to far off destinations such as Australia! Their cheese really knows how to get around!

The next stop was a cheese tasting with Joe in the new Cakeadoodledo (You must check them out) at Quickes cafe with our own reserved table. There are lots of different varieties “from the mellow creaminess of Quicke’s Buttery cheddar to the intense richness of Quicke’s Mature and the exquisite, crumbly complexity of the two-year-matured Quicke’s Vintage. We’re also proud to produce a range of other magnificent cheeses including guest milks such as the Oak Smoked Goat’s Milk Cheese, and Territorials including Double Devonshire and Devonshire Red.” Emma & Me had the hard job of trying them all and one of our favourites that we hadn’t tried before was the mildest Quicke’s Buttery. It is an extremely creamy & rich flavour but the buttery edge adds a smoothness to it. Like most of their cheeses it is cloth-bound and this cheese is only matured for 3 months. One of the benefits of Quickes is that their dairy and cheesemaking rooms are located so close to each other, ensuring the freshest milk possible to produce cheese. We had a lovely talk with Joe & the cheeses you can imagine were delicious and packed full of flavour. The next decision was what to have for lunch but seeing as we had just eaten cheese we thought a small sandwich would be nice!

Having tried to conquer the sandwich I was handed a lovely jute bag from Quickes with two pin badges, an apron & loads of materials to use at work. This was a very lovely gift from Mary & Joe and I’m wearing my Quicke’s pin with pride. Unfortunately the time had come for us to make our move back home but not without a stop in the shop for some cheese & butter. 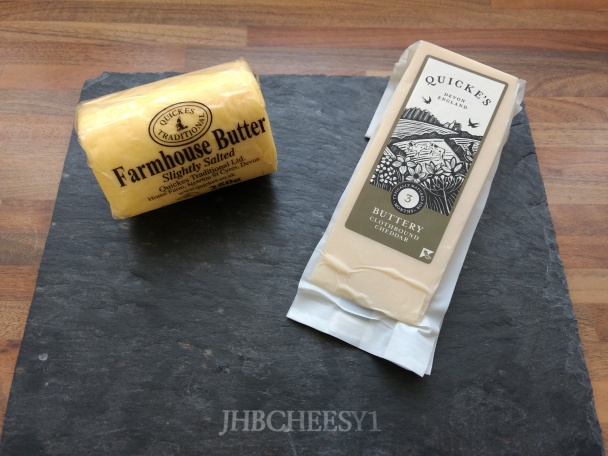 Having to leave was very difficult because we had been made to feel so welcome like we were home and there is a very likely chance that I will be returning in the near future. The good thing is that you can buy all their cheese from the Quickes online shop including their delicious butter.
I want to thank Mary & the whole team at Quickes for making Emma & Me feel so welcomed and relaxed on the visit.
Looking forward to seeing you all again soon,
The Cheesy1 & Emma

Reply to the Cheesy1 Cancel reply

This site uses Akismet to reduce spam. Learn how your comment data is processed.

Cracking a Whole Stilton from @cropwellbishopcreamery open this morning ready for the Mistletoe Fayre in Hythe today.
A fantastic evening at @guykremerlymington hosting a cheese & wine evening alongside @knackeredmother & @thesolentcellar for their clients. Great wine, great cheeses and great people.
What a wonderful time at the @internationalcheeseawards & @_lovecheese events. It is been a brilliant experience and something I'm looking forward to in 2022 already! Thank you to everyone for their support.
@chrisbaber and the @jhbcheesy1 seeing the new @ds_uk DS4 in the flesh. A wonderful standout car that exudes presence and the savoir-faire that you would expect from the @ds_official brand. If you live near Stafford then @wrdaviesmotors is the dealer you are looking for. There is more to come from DS & Myself but for now I look forward to driving one soon!
@jamesmartinchef is currently on stage entertaining the guests of @_lovecheese live with some delicious cooking
What a cheesy filled day! It was fantastic to see everyone and talk cheese at the @internationalcheeseawards. Tomorrow is the start of the @_lovecheese event and I can't wait to see everyone there!